“The thing I remember best about successful people I’ve met all through the years is their obvious delight in what they’re doing and it seems to have very little to do with worldly success. They just love what they’re doing, and they love it in front of others.”
–Fred Rogers, The World According to Mister Rogers

Hat tip to my mom for this week’s quote; I love Mister Rogers. She and I went to DFW Fiber Fest to see Stephanie Pearl McPhee (the “Yarn Harlot“) speak. It was great! This lady has a super successful blog, has published 8 books – 2 of which were NYT best-sellers – and is now pretty famous (in very specific circles)… and this is all based on the fact that she is a very good knitter and is also Funny About Yarn. The world is a magical place, people.

Speaking of the world being magical and amazing… In the 1850’s, paleontologists found half of a giant sea turtle’s humerus. It was the only known fossil evidence of this species for 160 years, until an amateur fossil hunter recently found another partial humerus that appeared to be of the same species. Lo and behold, the new piece was not only from the same species of giant turtle… It was from the exact same giant turtle.

“Giant” is not an exaggeration, by the way. At least one 10-foot-long turtle existed at some point.

Giant turtles used to exist and sometimes their fossilized bones turn up centuries apart in perfect puzzle-piece segments and life is beautiful. 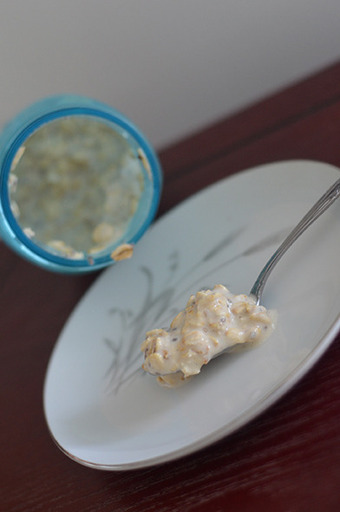 I’ve tried overnight oats before but was always pretty underwhelmed. I think the problem was previous recipes were using all/mostly yogurt and less sweetener, so it turned out really sour. This one uses mostly milk and includes chia seeds to help thicken it up. I didn’t have butter extract, I used white chocolate chips, and added a little cinnamon, so I can’t really verify if the original recipe tastes like cookie dough or not. Mine didn’t (maybe snickerdoodle cookie dough?) but it was delicious all the same!